Just when I’d begun to dive full-in to this faith thing, questions began to arise. Big questions. Questions that, depending on the answers, had the capacity to completely derail my faith. And that terrified me. It was

as if, with every question, I was teetering on the verge of hell. Luckily, God was holding tight to me, using my doubts and questions to draw me deeper into Him.

And I just realized… my short story, without explanation, will leave you baffled, wondering how it possibly connects to physics and Marcia’s excellent post. So, let me explain. 🙂 My questions had to do with biblical authority and credibility. I wanted to know if there was evidence to back up what I read. How did we know this book was God’s Word? How did we know Jesus truly was who He said He was? A man swallowed then regurgitated by a whale? Seriously?

These questions didn’t just arise my curiosity. They completely unsettled me, and I had to pursue them, regardless of where they led me. (I’m insanely stubborn that way.) So I spent the next three-to-five years studying EVERYTHING I could find: flood geology, archeology, astrophysics, the writings of the apostolic fathers, and the list goes on. 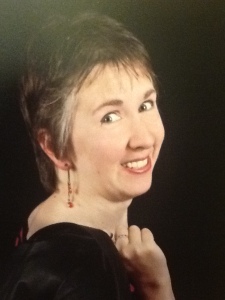 Here’s what I found: God uses it all. He is in all, the Creator of all, and the One who holds everything together. And yes, He can and will  even us physics to reveal another layer of His unfathomable glory. This is a hugely long intro into an amazing post written by Marcia Gunnett Woodard.

God speaks to each of us differently. With me, it’s often through words and ideas—His, mine, or someone else’s. Math and science, not so much. The other day, though, He and I had an interesting conversation about physics and walking on water. I was reading the story of Peter going to Jesus, walking on the water.

…He came to them, walking on the sea. When the disciples saw Him…they were terrified, and said, “It is a ghost!” And they cried out in fear. But immediately Jesus [said], “Take courage, it is I; do not be afraid.” Peter said to Him, “Lord, if it is You, command me to come to You on the water.” And He said, “Come!” And Peter got out of the boat, and walked on the water and came toward Jesus. But seeing the wind, he became frightened, and beginning to sink, he cried out, “Lord, save me!” Immediately Jesus stretched out His hand and took hold of him, and said to him, “You of little faith, why did you doubt?”  (NASB)

I heard God whisper, “What’s wrong with this picture?”

It was the same old story it had always been, but I sensed Him wanting me to see it through new eyes. I looked at it again and heard Him whisper again.

“How many times have you jumped in a pool? What’s wrong with this picture?”

I started thinking about jumping into a pool, about how short the time is, between when you leave the land, and when you are completely immersed. That was when I saw it!

I searched physics websites, asking the question, “How long does it take a six foot tall, 200 pound man to drop six feet?” I gave Peter the benefit of the doubt, though it is highly unlikely that he was that large. You know what I discovered? 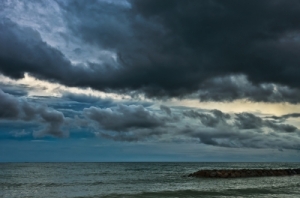 Isn’t that amazing? Doesn’t that just make you want to wave your hands in the air, shout “Amen!” and get up and dance? It doesn’t? Maybe I should explain.

The Scripture says Peter saw the wind, got afraid, and began to sink. Then he called out, “Lord, save me!” Or in another translation, “Master, help me!” But from the time Peter was standing on top of the water to the time the water closed over his head should have been 0.15 seconds! Do you know how much you can say in 0.15 seconds? I timed it with a stopwatch.

What if it means that in spite of the wind, in spite of his fear, in spite of the fact that Jesus didn’t seem to be near enough to reach him, or help him, or get there in time, Peter wasn’t really sinking? The Scripture says, “…he began to sink.” His feet may have been getting wet, but it sounds like he wasn’t going under! Jesus’ miracle-working power was still keeping him above the waves.

And the same is true for us. No matter how bad the circumstances around us look. No matter how frightened we are. No matter how far away Jesus feels in that moment, He is there! And His resurrection power is at work in us, keeping us safe ’til the storm passes by.

How about it? A lesson on faith from a law of physics? Can I get an “Amen”?

Marcia studied English and writing at Indiana Wesleyan University, and has been a published writer for over 30 years. She has written devotional and inspirational articles, newspaper stories, theatre scripts, short fiction, and children’s books. She is also a freelance editor and writing consultant. Her “day jobs”—newspaper carrier, Avon lady, barista—have fed her incurable fascination with people, and she enjoys writing to explore the commonalities and diversities of the human race. She sees her mission as using the parabolic arc of story to launch projectiles of truth and grace past barricaded minds and into walled-off hearts. Visit her online at her blog, It’s All About Marcia and website, and connect with her on Twitter (@MarGunWoo) and visit her Facebook page: Marcia Gunnett Woodard

Let’s talk about this! Did Marcia’s post increase your appreciation of this miraculous account? When has God captured your interest with a story, sentence, or word, inviting you to dig deeper, and what were the results? I’m pretty sure we all have times of doubting and questioning. Can you share yours? Did God use your questions to deepen your faith, and if so, how? Share your thoughts here in the comments below or at Living by Grace on Facebook.

Before you go, I invite you to view the Christmas story through, perhaps a deeper lens. God chose a rather unlikely cast to share in the glorious incarnation. Kinda makes you wonder why, huh? And what was the real reason Mary and Joseph couldn’t find a place to stay? Join me on Renee’ Blare’s blog as I talk about this Unexpected Christmas Cast.

Oh, and some fun news! Readers have been messaging me to tell me Amazon is shipping my second novel. Woo-hoo! I can’t wait to hear what they (and you?) think of it! And I absolutely can’t wait to get my

author copies. It’s always fun to hold an actual copy of your book. And to blast pictures of you doing so all across FB. haha.

2 thoughts on “Faith and… Physics? A Different Perspective on the Walking on Water Account”