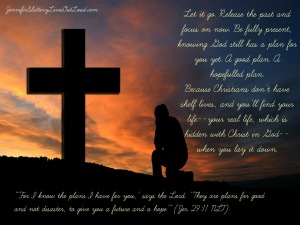 You may have heard the expression, you can’t move forward when you remain fixated on the past. When our thoughts are consumed with old hurts or successes we’ve experienced. We may even begin to wonder if God is through with us, but friend, Christian’s don’t have shelf lives. If you’re breathing, God has a plan for you. A glorious, hope-filled plan.

Today, Michael Ehret shares how clinging to the past can hurt us, and shows us through his experience how we can move forward and see what God is doing in us now.

Where are you reveling?
by Michael Ehret

In high school, I won a couple awards for various things now long forgotten and unimportant. One award, however, stood out for me because I worked so hard to get it and,

I must admit, I felt I deserved it.

Each year the drama department of our high school would hold an awards ceremony—our own little Oscar night in Elkhart, Indiana. My tribe then was the drama and choir folks. As far as we were concerned, these awards were it—the be all and end all of the year.

In my senior year, I almost didn’t attend the banquet because tradition held that the “Best Actor” award went to the male lead in the fall musical. I did not get that role (Georg Von Trapp in The Sound of Music) after tryouts and was still sore about it because I really wanted that “Best Actor” trophy—and now I wouldn’t get it and would have to pretend to congratulate the guy who would get it. Talk about a “Best Actor”-worthy performance!

But I went. When my name was called as the winner of that coveted trophy, it was a true shock. But it shouldn’t have been. Because I had done considerable work on the stage in other productions that year (and, truth be told, I was a senior—there are benefits).

I thought of that moment in my life when I came across this passage of Scripture the other day:

“Eternal One: Don’t revel only in the past, or spend all your time recounting the victories of days gone by. Watch closely: I am preparing something new; it’s happening now, even as i speak, and you’re about to see it. I am preparing a way through the desert; Waters will flow where there had been none” (Isaiah 43:18-19, The Voice).

When I think about winning that trophy now, and I do frequently, it’s not an altogether happy memory. Looking back, I can see how my anger at not getting that one role (that ended up not mattering) colored my whole year. And I see a selfish young man that God has had to do considerable work with.

I’m grateful for that soul work, but there remains much to do in my life because Isaiah’s admonition to the Israelites—and to me—is still instructive.

I’ve forgiven the young me for his selfishness in the past, but until recently I was still living (reveling) in the past in other aspects of my life, namely my writing. I’ve dealt with this in other places recently (Part 1 HERE and Part 2 HERE), so I won’t go over that again today.

Today let’s look forward. Today let’s look at Verse 19: “Watch closely: I am preparing something new; it’s happening now, even as I speak, and you’re about to see it. I am 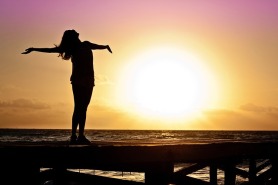 preparing a way through the desert; Waters will flow where there had been none.”

This is exactly what I did when I allowed a bad editor appointment to derail my writing for years. I gave up on many opportunities that God might have set in front of me because I was glued, pie-eyed, to the video in my brain of that editor telling me my writing wasn’t ready (it wasn’t). I looked back because I was afraid to look forward.

Don’t let that happen to you, whether you’re a writer or not. Look back at the past to learn from it—to gain motivation to look forward. But don’t look back so much that you end up living there. There’s no real life in the past.

Michael Ehret has accepted God’s invitation and is a freelance editor at WritingOnTheFineLine.com. In addition, he’s worked as editor-in-chief of the ACFW Journal at American Christian Fiction Writers. He pays the bills as a marketing communications writer and sharpened his writing and editing skills as a reporter for The Indianapolis News and The Indianapolis Star.

Let’s talk about it: Today, Michael shared his experiences with reveling in his past and how he moved on. Are you struggling with letting go of something now? Have you had something from the past you used to hang on to? How did you move beyond it? Share your thoughts on Facebook at Living by Grace or in the comments below. We can all use some encouragement and help!

If you follow me online, here’s where I’ve been this week:

Last Friday, I had the pleasure of visiting with Mary Vee where I spoke about how God can use deep pain and sorrow to bring about eternal gain. Read it HERE. I also had the privilege of being interviewed on Lena Nelson Dooley’s blog. You can read it HERE–and there’s a giveaway of my latest release, Breaking Free. Finally (Friday was a busy day!), I spent some time with Robin Lee Hatcher in an interview. Join in the conversation HERE, and don’t forget to subscribe to her newsletter for another chance to win a copy of Breaking Free.

On Monday, Robin E. Mason highlighted me on her “New Week, New Face” feature where I wrote about the personality of a writer–I’m truly normal…or as normal as one can get. Come talk with us HERE.

If you’re local, I’ll be at Divine Truth Christian Bookstore in La Vista, NE this Saturday for a book signing. I would love to see you there!

And if you’re within driving distance of Omaha, I do hope you’ll join me at the Wordsowers Conference where I’ll be teaching how one can craft characters that grab hold of readers on a deeply emotional level.

One last thing. In August, I’ll be in Nashville for the first Christian Fiction Reader’s Retreat. Head HERE to read about who will be there and to register. I would love to see you there!

Other resources you may enjoy:

Releasing the Past to Live in the Now

A Woman With a Past, a God With a Future by Elsa Kok

10 thoughts on “Looking Back and Moving Forward”

Just over a week ago, I felt a depth of grief that completely overwhelmed me and left me intensely sick to my stomach. A depth of grief I’ve only felt a total of three times in my life, and each one leveled me and stuck with me. The first was when I was praying for […]

Our Only Objective Source of Identity

I’ve tried to define myself a lot of different ways—to nail down who I am, or at least, who I’m supposed to be. But I always came up short. Initially, I tried to prove myself through education. I’ve attended eight different colleges in five different states and have pursued—not completed, mind you, but pursued—nearly as […]

“I heard God tell me that just the other day.” A sentence during a seemingly normal conversation pulled me out of my reverie and I stared at the speaker. “Could she have heard from God about something as mundane about her grocery choices? That seems a bit ordinary for God to stoop to let us […]