When did our children’s behavior become an extension of ourselves? Or am I the only one who seems to have a difficult time recognizing that my child is autonomous, able to make her own decisions and mistakes? When I speak to parents, especially those raising prodigals, I encourage them to analyze the parable Jesus told of the man with the wayward son. Once we recognize who the father represents in the story, I believe we’ll begin to cut ourselves some slack. Because honestly, parenting is crazy-tough, and we all could use a fair amount of grace in this area.

Today, Robin Patchen visits us again to share part two of her encouraging and insightful piece on what it looks like to entrust our children to Christ.

Trusting God With Our Children Part 2 by Robin Patchen

When my oldest chose drugs over our family, my husband and I let him walk away. But we didn’t forget him—not for a moment. No, we prayed and begged God to bring him home. At one point when I was praying, I felt the Lord’s words in my ears. “Do you trust me with your son?”

Did I trust him? Too many young people, many children of godly parents, get lost to drugs and alcohol—or simply lost to their own foolish choices. Some kids end up in prison, others end up homeless. Some run away and aren’t heard from for years. And some end up in the grave. There are no guarantees for any of us. Trusting God meant facing that my son could be lost to us for a time, or for good. But I knew I couldn’t fix it, and I believed God could. I was out of options.

I decided at that moment that I did trust Him with all my children. It was either trust Him or go mad with grief and fear.

My first-born’s story has been a testimony to God’s provision. He brought my son home. He went to rehab, he got clean, and now he’s studying to be a missionary with Youth with a Mission.

God’s plan for my son was not my plan for him. He rejected us and rejected God, but God never rejected him. God wooed him back, pulled him through, and turned him into this amazing, Spirit-filled young man with a burning passion for Christ. None of that would have happened apart from the rebellion that started it all.

So are we failures as parents, because our son landed in rehab? Or, are we good parents, because now he’s walking with God? Or, are we merely imperfect parents, doing our best—all anyone can be asked to do? God knows our faults and shortcomings, and He blessed us with these young people anyway. How they turn out is ultimately in His hands. No matter what happens, I will continue to trust Him with my children.

Robin Patchen is an award winning multi-published author, but only because she can’t pursue her other dream.

If time and money were no object, Robin would spend her life traveling. Her goal is to visit every place in the entire world–twice. She longs to meet everybody and see everything and spread the good news of Christ. Alas, time is short and money is scarce, and her husband and three teenagers don’t want to traipse all around the world with her, so Robin does the next best thing: she writes. In the tales she creates, she can illustrate the unending grace of God through the power and magic of story. 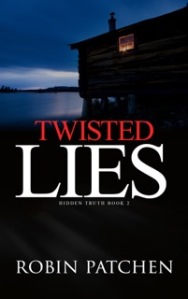 She thought they’d never find her.  And then her daughter vanished.

Marisa Vega’s life as an adoptive mom in a tiny Mexican village isn’t what she’d dreamed while growing up in New York, but as the target of a man who’s convinced she stole millions of dollars from his financial firm, Marisa believes hiding is her only way to stay alive. When her daughter is snatched and held for ransom, Marisa must discover who really stole the money in order to rescue her.

Months after being kidnapped, tortured, and left with PTSD, Nate Boyle is ready to live a quiet life in rural New Hampshire. When the source of his breakout newspaper article—and the woman who haunts his dreams—begs for help, he gets pulled into a riddle that’s proved unsolvable for nearly a decade.

Can Nate and Marisa unravel the years-old mystery and bring her daughter home?

Buy it on Amazon, Kobo, iBooks, B&N, and find it on Goodreads.

11 thoughts on “Trusting God With Our Children Part II”

Risking Failure to Become All God Created You to Be

How many opportunities have you avoided, how many dreams have you never pursued, for fear of failure? Or perhaps you embraced that new challenge but then spent countless sleepless nights fretting over what might happen or what others might think when you didn’t measure up or succeed? The summer before our daughter’s senior year […]

Letting Go of the Need to Control – Guest Post

Lately, our world seems completely out of control. When I focus on all the chaos, I worry about our economy, about loved ones, about my daughter and son-in-laws college classes … in short, about a lot. But then I remember truth, and that truth grounds mean. If you find your thoughts pinging in a thousand […]

In my young adult years, I wasted so much energy, so much peace, trying to prove my worth. Driven by a hidden fear of insignificance, I chased after one goal after another and defined myself by external and subjective standards. As a result, I developed a rather shallow sense of purpose and believed the lie […]