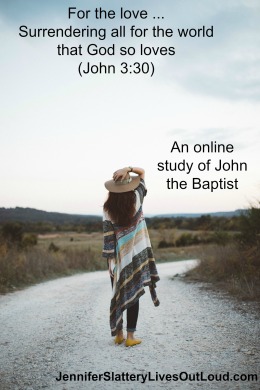 I had a very difficult pregnancy, one characterized by the constant fear that I would lose the precious child I’d prayed for, that I’d grown to love so deeply, from the moment I knew she existed. One night in particular, everyone–myself, my husband, our doctor–was certain I had. I was awakened in the middle of the night by a strong, rapid, and continual trembling and rolling in my abdomen followed by significant bleeding, and my husband rushed me to the hospital. As I lay on that cold, hard table, all I could  pray was, “No. Please Lord, no.”

I went home that night with my sweet Ashley, still very much alive, but my prayers took on a desperation after that. A bit of bargaining*. “Lord, if you’ll just help me keep this baby to term, I’ll give her back to you.”

I remembered that promise often in the days and years ahead: When I was tired and

tempted to forgo our nightly Bible reading. When I was frustrated and tempted to take the easy road, parenting wise. When my heart was breaking over something she’d endured and I was tempted to focus on fixing the situation rather than helping her grow in Christ.

All I can say is, 19 years later, as I see the young woman God’s molded our girl into, I’m oh-so-grateful for that promise and how God used it to help me raise a child who does her best to reveal Christ.

This is our focus this week in our For the Love Bible study, and my special guest author Candee Fick talks about what this looked like for John the Baptist’s parents and how we can follow their example.

It’s not everyone who gets a supernatural birth announcement or a miraculous baby after years of infertility. Personally, I think Zechariah and Elizabeth might have needed the

overly-dramatic beginning to give them the stamina and dedication to prepare their child for his destiny—to prepare the way for the Messiah. Every day they saw John’s face they had to remember that God was intimately involved in their lives, and then remember that John was born to tell others about the coming Christ.

Can you imagine the stories shared around the fire? John must have grown up surrounded by village tales of a heavenly voice in the Temple and a temporarily-speechless father not to mention an entire hill country wondering what he would grow up to become.

John’s life was the stuff of legends and the angel even said he would be great. Being told he would be filled with the Holy Spirit and go before the Lord in the power of Elijah could have led him to believe that he was something special.

Except he wasn’t the greatest. Somewhere along the way, his parents not only raised John with the skills he would need to fulfill his personal mission of bringing the people of Israel

back to God, they had to teach him to deflect the attention toward God. Huge crowds gathered to listen to John’s message of repentance, then one day John looked up from baptizing folks on the banks of the Jordan River and knew the time had come for his audience to follow Someone else instead. Between the Holy Spirit and the training he received from his parents, John obviously recognized the pivotal moment for what it was and transferred the crowd’s fickle attention with his announcement for them to “Behold, the Lamb of God.”

How did John’s parents raise a child who pointed others to Christ?

I’ve got a son who is gifted with some serious athletic talent. In fact, he lettered in four sports his senior year of high school and is now in college with a basketball scholarship. All that to say, it would have been very easy for him to get a big head and strut his stuff down the hallways.

While this isn’t on the scale of a John the Baptist, as a mother I have tried to constantly remind my son of the Gift-Giver and his responsibility to use those gifts in a way that points people back to God. I strive to keep the presence of God in the middle of our family through prayer, devotions, and natural testimonies of what God is doing in my own life. To identify examples of God’s hand at work in the lives of others. Ultimately, my hope is that my oldest son will use his platform as an athlete to be the right kind of example for younger boys to model as he deflects attention heavenward.

Consistently pointing back to Christ is a difficult lesson to learn and even harder to live. Yet aren’t we all called to do the same, to use our gifts for God’s glory and then become less so that God’s message can become more? Thanks to the influence of his parents, John learned to to do just that.

Danielle Lefontaine, a fledgling actress raised to the lullaby of Broadway, searches for her long-lost brother and her place on the stage, but a jealous cast member and numerous fruitless leads threaten to drop the curtain on her dreams and shine a spotlight on her longing for a place to belong. Meanwhile, Alex Sheridan is living his dream except for someone to share it with. When Dani dances into his life, he hopes he’s found the missing piece to his heart but fears the bright lights of a bigger stage could steal her away.

Will the rhythm of dancing feet usher in their deepest desires or leave them stranded in the wings?

Find Dance Over Me on Amazon in ebook and paperback.

And for a funny, more lighthearted post by Candee, visit my alter ego’s blog to read how she lives in continual weather-confusion. (You can read that HERE.)

Candee Fick is the wife of a high school football coach and the mother of three children, including a daughter with a rare genetic syndrome. When not busy with her day job or writing, she can be found cheering on the home team at football, basketball, baseball, and Special Olympics games. In what little free time remains, she enjoys exploring the great Colorado outdoors, indulging in dark chocolate, and savoring happily-ever-after endings through a good book.

Let’s talk about this! If you’re parenting now, what are some ways you try to raise your children to point to and reveal Christ? What makes this hard? If your children are grown, what were some ways you did this while they were growing up? Can you see the results of your efforts now that they’re adults? Share your thoughts with us here in the comments below on Facebook at Living by Grace, or join our Facebook Bible study group For the Love to discuss this further. Because we can all learn from and encourage one another! 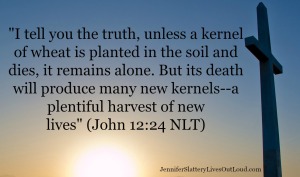 And for those following our Bible study, here’s this week’s memory verse, one God intends for each of us to live out, daily, and to teach our children to do the same.

*Note: God’s will cannot be “bargained” nor does this post intend to support that or encourage one to even try. Rather, it shares a moment of heartache and terror and my human response, and how God later used that, because He truly can use it all–our successes and failures, our steps of obedience and our regrets and weaknesses.