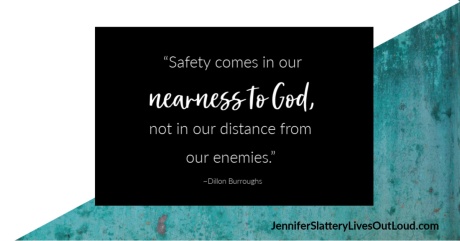 In 2006, my husband stepped into an ugly power struggle that nearly cost him his job. In the span of a year, he’d changed employment three times, landing, precariously, at the company he’d started with, but in a different location and with a pay cut and demotion. The organization he initially quit, with zero notice. Therefore, though my husband’s former boss, through God’s grace, invited him back, Steve’s position felt shaky at best. Like he was one mistake away from unemployment.

Adding to this mess of uncertainty was the fact that my husband was coming in both equal and under the current shop director. A man accustomed to little oversight, and whom we soon discovered was behaving unethically in countless ways. He was allowing employees to “steal” time, was misreporting injuries, misusing his company credit card in outlandish and grievous ways, and gave those with influence special privileges. Worse, he pressured my husband to comply with his dishonest tactics.

Though anxious, my husband refused, knowing, however his boss responded, whatever occurred, his allegiance was to Christ and Christ alone. He made the right hard choice. The result: the truth eventually came out, his boss and numerous managers were fired and walked off the property, while my husband was promoted.

We rejoiced at God’s goodness and grace, celebrating the fact that righteousness and justice had prevailed. Soon, however, our praise turned to desperate prayers for God’s intervention and protection as evil, power-hungry men used to getting their way slandered and attacked him.

One man in particular, the union rep, determined to make it his mission to get my husband fired. Every day, he bombarded my husband with accusations and demands in an attempt to wear him down. When this didn’t work, he turned to the Chief Executive Officer telling him how “terrible” my husband was. Once sent, he printed and prominently displayed the letter he wrote, in which he’d twisted everything my husband had or hadn’t done in an effort to make him look bad.

While walking down the hallway one morning, my husband happened to see this letter, tacked on one of the union bulletin boards. He felt attacked and deeply fatigued. Not only had his continual decision to make the right hard choice not produced positive results, but it’d landed him in a mess. One that felt never-ending and in fact appeared to be gaining momentum.

With every interaction, my anxiety climbed. What if this man succeeded and Steve’s company let him go? Where would he work? How would we pay our bills? Our mortgage? What if we lost our home?

Initially, our world felt out of control. Our security only as steady, as sure, as my husband’s next paycheck. But then we remembered our sure foundation, the immovable rock upon which we stood. 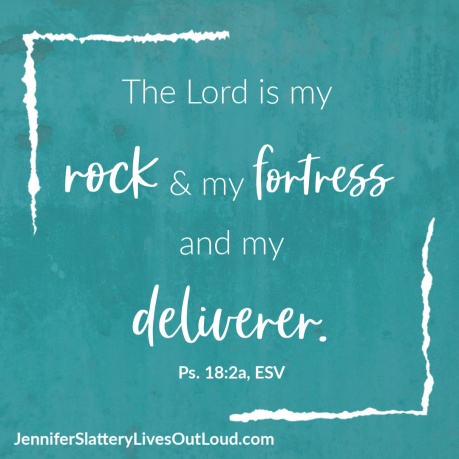 This was written by ancient Israel’s second king, a mighty warrior who’d once defeated a tyrannical giant without displaying a hint of fear. But this warrior found strength not in himself and his military prowess, but instead in His sovereign, all-powerful, ever-present God. He recognized how insufficient, how vulnerable, he was apart from God, but more so, how protected, untouchable, he was when raised upon the crags of God’s love.

Towering rocks or bluffs dotted the landscape of ancient Palestine, providing places of refuge, of protection, for all who scampered upon them. These elevated geological edifices were difficult to reach and offered shelter within their caverns. Therefore, they became places of safety in times of danger.

Fortresses offered similar protection. The people built heavily-fortified cities high upon a cliff, where they could see enemies approach for miles. Then, they erected stone towers at the highest point in the city.

Can you sense the layers of protection revealed in the Psalm 18 passage? In Christ, we stand high upon an immovable rock of power and grace, further hidden within the clefts of His love. His strength is greater than anything or anyone that comes against us. We are triply protected within His steadfast embrace. He is our sure and constant deliverer, the rock beneath our feet, and the fortress surrounding us.

In 2006, as attacks continued to barrage my husband and our family, we hid ourselves deeply in God. When anxiety arose, we reminded ourselves of where our true security lay, and all we knew to be true about God. He was faithful, loving and attentive—unconquerable. He was our ever-present provider, the only One with the power to sustain us.

That year, He proved Himself to be all those things and more. I’m confident He’ll do the same for you. Whatever you’re facing, whatever is coming against you, rest in this: God’s got you. He’s standing beside you, within you, and is camped around you. He is your refuge, your rock, and your strong, fortified tower.

You don’t have to be strong or know all the answers—that secret that will somehow whisk you to safety—because in Christ, you’re already safe.

Let’s talk about this! When has God proven Himself to be your rock and your fortress? How might remembering this time help you when future problems hit?

If you’re facing a difficult, uncertain period, how might it help to shift your thoughts off your ever-changing circumstances and onto your immovable Savior?

If you currently feel under attack, make sure to keep an eye out for my upcoming Faith Over Fear podcast, releasing at the end 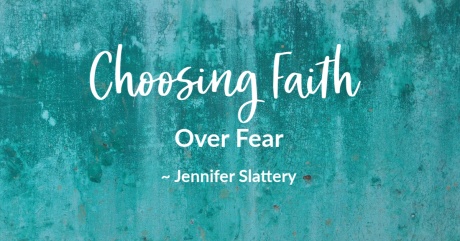 Staying Alert to the Harvest God is Preparing

Sometimes we can become so focused on where we wish God would work that we’re unable to see where He’s working all around us. We can become so fixated on trying to shove through a closed door, we miss a thousand other openings He’s prepared for us. About five years ago, my husband and I […]

One man or woman of character, fully surrendered to God, can change the world. You and I can impact families, communities, for the good for generations to come. Will you and I, as God’s ambassadors, do that which is convenient? Maybe personally beneficial? Or are we willing, on occasion, to flip a table or two. […]

And now … for the reading plan

I did it again, y’all. I really need a “before I publish blog posts” check list. For those following the chronological reading plan, I updated my previous post to add it. But I knew those who receive my posts by email likely wouldn’t see that, so I’m creating a follow up. Here’s week the reading […]