Before I introduce you to today’s devo, I’m going to route you over to Reflections. Elaine Cooper, author of The Road To Deer Run, shared a very touching story with us today, one that for me was like a heart-exposing microscope. I don’t want to sound callus, or belittle the intense pain she went through, but I do want to point to a deeper truth. There is one reason and one reason alone that Elaine and her husband were able to stand–because Christ held them together. I have seen tragedy hit both the Christian and non. From my experience, without Christ, humans become increasingly angry, cynical and bitter as they age. While the Christians I know become increasingly joyful and loving. I cannot speak outside of my personal experience, but year after year, life after life, this is what I’ve seen.

Now to jump off my heart-wrenching soap box (because that is how I feel watching the non-believers around me spiral into increased anger and distrust, knowing the way to the ladder, but being powerless to take that step for them), let me introduce you, once again, to Sheila Hollinghead. The following article was first posted on Sheila Hollinghead’s blog, Clearing Skies. 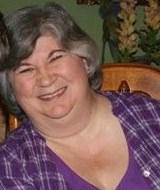 Here in south Alabama, almost everyone loved the snow we received Friday. After all, it had been seventeen years since our last real accumulation of snow. So when huge flakes fluttered from the sky, we pulled out gloves, scarves and thick coats for the grandkids. Outside, the eight-month-old reached to touch the snow and looked at me in amazement when he felt its coldness. His brother and sister threw snowballs and built snowmen while I drank in the happy sight.

No one was more excited about the falling snow than our Siberian Husky, Satchel. He pulled against his chain, eager to join in the fun. We released him and a new-found energy, some secret connection between his snowy-white fur and the snow flakes, had him frolicking, prancing and jumping in excitement. His face broke out into a dog smile. We joined in his fun, laughing at his display of pure, unbridled joy.

But inside I felt a little sad. He is a Siberian Husky, made for the snow, for the cold, and he relished in it. Yet he lived here, in the south with our hot, muggy summers, so far away from his true home.

Yet can’t the same be said of us? “This world is not my home, I’m just a passing through.” We were made for heaven and unbridled joy awaits us there. This world with its disappointments, sorrows, pains and tears is to us like the hot, muggy south is to Satchel. But one day Jesus will say, “Enter in, faithful servant” and we will be happiness personified, like Satchel in the snow.

Sheila has a B.S. in biology from Alabama’s Troy University and did post-graduate work at Auburn University and Columbus College. At Southern Junior High in Columbus, Georgia, she taught middle-school science for five years. After moving to Opp, Alabama, she continued teaching science and math for fourteen more years at Fleeta Junior High. In 1995 she retired and has since devoted much of her time to the study of the Bible and to her writing. Her blog is the inspirational Clearing Skies.

As always, if you loved today’s devotion, fb share it, tweet it, or leave a comment. (Apparently my “like” button isn’t working. I’d try to fix it, but I’m off to meet my mentor. grin.)

4 thoughts on “A Fish Out of Water, I mean, A Siberian Husky in the South”

On New Year’s Eve, as I sat across from the love of my life and, together, we reminisced on all of our successes and failures, some patterns emerged—patterns of beauty, of growth, of healing. Of heart-purging and filling, adding clarity to my days ahead.