Sometimes our greatest assignments, the steps towards our calling, come during the most mundane activities. And I wonder if the converse might be true as well. Is it possible to miss an amazing, God orchestrated opportunity when we’re focused only on chasing after something we believe will be amazing? I suspect perhaps, because whenever we chase a thing, be that dreams or success, more than God, we’ve slipped into idolatry, and Our loving Father cannot bless that, as worship of “self” always robs, steals, and destroys.

As some of you may know, I never wanted to be a writer or speaker. It wasn’t that I was opposed to those roles; I just never considered them. I thought I was going to be a teacher. I don’t know why that career came to mind. I think I just wanted to do something and that seemed like something I could do. So I started attending college. I also began serving in my local church, mostly where I saw a need.

When our daughter was young, we lived in Southern California, and the church we attended hosted Friday night services. Those often had the most inconsistent childcare, so, wanting to ensure options for parents who worked Sundays, Steve and I covered that time slot .

That was crazy hard for numerous reasons, in part because we had a large class filled with students of widely varying ages and attention spans. But, week after week, we did our best.

I soon became involved in other ways. I wrote curriculum, sometimes that never got used, other times that was used for a season. I also wrote dramas, parent newsletters, and short story snippets, almost always with no one, besides myself and the person I served under, knowing I’d written it. But God knew. And He was working in and through me to grow me and lead me to where I am today. In fact, God used those activities and experiences to awaken my love for writing.

I’ve experienced opposite scenarios as well. I sensed God nudging me to launch Wholly Loved Ministries for at least two years before I finally responded. I felt I was too busy with my writing career and pursuing activities I found most important. I wasn’t in outright disobedience as I always attributed those heart pricks to vague stirrings, but I never hit pause long enough to truly seek God’s will in how He wanted me to spend and prioritize my time. I was too busy moving ahead.

I became overly focused on my career and under-focused on my Savior, my power source, faithful guide, and stabilizer. As a result, my stress and anxiety levels grew, as did feelings of discouragement and disillusionment.

Eventually, out of mercy, God intervened and halted my writing for a time. Long enough for me to launch my ministry and for Him to purge and realign my heart.

Back then, it felt a bit like death, but in reality, God was restoring life to what had become diseased. 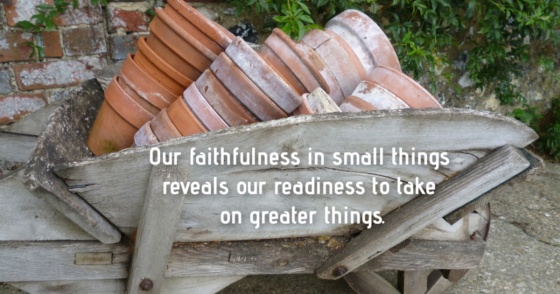 on greater tasks. This means those who work behind the scenes, those who show up every Sunday, who do what needs to be done regardless of who else knows or sees, or what accolades they receive, will also be faithful in the big and glorious tasks. Perhaps because their heart won’t be in the accolades or the thank yous, but in serving and glorifying their Savior. Conversely, those who aren’t faithful in the little things—the trash emptying and toilet scrubbing, the baby rocking and phone call making, won’t be faithful in the big assignments either.

Maybe because we’ll make them about ourselves—our agendas and glory—rather than God’s.

We see this throughout Scripture. Moses, an orphaned baby turned Egyptian prince turned fugitive turned liberator, received God’s call while watching sheep (Ex. 3), a mundane and largely thankless job he performed day after day, with no one watching, and probably no one paying much attention to. God called the ancient prophet Elisha, Elijah‘s predecessor, while he was working in a field (1 Kings 19:19-21). God anointed Saul, Israel’s first king, to leadership, while he and a servant engaged in a three day journey in search of a donkey (1 Sam. 9-10). Then there was Joseph, a braggart teen who received a God-sized dream but was “discovered” while serving, faithfully, as an imprisoned slave (Gen. 37-41).

I could go on. The Bible is filled with men and women who learned of amazing and history-changing assignments while performing mundane and humble tasks. We also see those who became obsessed with certain roles or opportunities, who put their desires for self-elevation and respect or prestige above their relationship with and worship of God, who lost it all. Who not only lost that very thing they so fervently sought, but who traded inner calm for anxiety, significance for futility, and joy for defeat.

May we, myself included, learn from their example.

Let’s talk about this! What are you chasing after most, that next promotion or opportunity or your Savior? What occupies your thoughts most, your achievements and goals or God’s glory? Can you share a time when God redirected you off of an obsession and onto Him? What was the result?