In Matthew chapter 13, Jesus equates the kingdom of heaven to a mustard seed, a tiny seed which, when sown, grows into a large tree–a tree that produces perhaps a million seeds. Although I’ve never seen a mustard tree, our yard has plenty of  dandelions. Christians, like those tiny tufts carried by the wind, are meant to multiply, exponentially. Today’s story by Yvonne Blake gives us a glimmer of “grace-ematics.” It also reminds me how privileged we are to have easy access to God’s Word. With privilege comes responsibility for to him who much is given, much is required. May we never take this privilege for granted and may we surrender each gift, each privilege, to the hands of our Father, to be multiplied according to His sovereign grace.

Five years ago, I had the privilege of meeting Fernando Angeles, a man who grew up in a small village in the eastern mountains of Mexico. As a child, Nando spoke Tenek (an oral language at that time) and only heard about God in Latin or Spanish.

After he had gone away to school and learned to read Spanish, he was given a New Testament. He read the entire book in ten months and learned that salvation didn’t come from being good and following rules, but by believing in Jesus’ gift of eternal life. 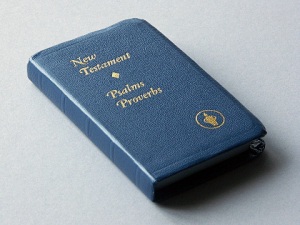 He went to Bible school and later to the United States to learn more. Now, he and his wife, Christy, minister to his own people. They are also translating the Bible into Tenek so others can hear Christ speaking in their own language. 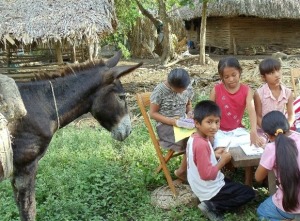 I have written about Nando’s Bible, and I had the privilege of teaching it to our VBS this summer. I am hoping to publish it soon so that young people will see the need to reach out to those around the world who have never heard the Gospel in their own language.

Pray for Fernando and Christy Angeles, facing the darkness of sin while they strive to reach the Tenek people of Mexico.

God has blessed Yvonne Blake with an interesting childhood. She has lived in the deserts of Arizona, the tropic islands

of the Bahamas, the rugged hills of New York, the farmlands of mid-Maine. Her husband is her steady rock, loving his Lord and family. Raising a family of eight children, in Searsport, Maine, has been her focus over the last thirty years,which gives her storerooms of material to draw from. Striving to do their best regardless of the opinions of others, they have often lived out of step with the rest of the world. Now that her children have grown, she has chosen to stay home and write, releasing all the stories bottled in her mind. Her prayer is to be used of the Lord, to encourage and bless others with her writing.

Her Blog – My Back Door

Her Webpage – About Me