There have been so many times I’ve stressed over something that never happened. I am frequently reminded of God’s admonishing to lean not on our own understanding, to walk by faith and not by sight, and not to worry about what might happen tomorrow. 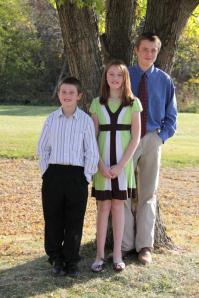 I believe this is not merely excellent mental health advice. More often than not, God’s already got it covered, so don’t sweat it. Wait with peace and confidence for God to show up.

Michele Mangus’ story reveals the omniscience of God and His ever tender care in our lives. I believe God works behind the scenes much more frequently than we realize, but every once in a while, we catch a glimpse of His Sovereign, protective hand.

Eight years ago, money was tight and health insurance was not an option.  Our youngest son, Sam, suffered from what seemed like a typical childhood cold. My husband, a trucker, was out of town. At first I didn’t worry about it, but several days had passed without improvements.

“Hi honey, I think Sam needs to see his doctor,” I said to Nathan late Monday night via cell phone.

“Is his cold getting worse?”

“His fever is higher. His appetite is gone and he’s not drinking enough. I think he should see the doctor tomorrow, but we don‘t have the money for it.”

Tuesday morning I called the doctor and made the thirty mile trek into the big city. Ten minutes with the doctor and a fifty dollar bill later they said it was most likely a virus. It would have to run its course and  I should keep pushing fluids on him.

“Not good, the Motrin is not working. His fever is one hundred and two even with the medicine. It’s a real struggle to get him to take liquids. I’m worried.”

“Should you take him into the ER?”

“Yea, I should, but that cost money we don’t have.”

“Take the boy in, Michele. His health is more important.”

To make a long story short, we got nowhere in the ER. More of the same old, “he just has a virus.” So home we went at five in the morning, instructed to alternate Tylenol with Motrin to help with the fever.

Twenty-four hours later Sam started to have febrile seizures and no tears when he cried. That was it! Something had to be done. I loaded a lethargic baby into our car at midnight and called my mother to come stay with the other children while Sam and I headed to the big city ER.

This time he was admitted him for further testing, x-rays for pneumonia, and was given IVs. The hours dragged by with no improvement for my sick baby. Just before dawn Sam and I were wheeled to children’s ward.

I called my husband in tears.

“We are in isolation on the children’s floor. Everyone is required to wear a gown and mask to come in here. I’m scared he’s going to die. Where are you? I need you!” I swiped at the tears dripping down my cheeks.

“Michele, you don’t know he is going to die, he is in God’s hands. Don’t fall apart now.”

I sat in Sam’s bed holding him, rocking him and praying to God. Please, Lord, don’t take my baby, I’m not ready to give him to you. He is so young. Lord give the doctors the wisdom they need to help him.

Looking up, I saw a young doctor standing beside Sam‘s bed. “I’m concerned about the lack of tears and the decreased urinary output. Does he normally lie around?” The doctor warmed the stethoscope against his palm.

“Mrs. Mangus, we need to run some more tests on Sam. I’m not sure what is wrong with him. I would like to do a spinal tap. There is a possibility that he may have Spinal Meningitis”

You want to do what? Stick a needle in my baby’s back? Oh Lord I need strength and wisdom to make this decision.

“We don’t have insurance. There is no way we can pay for this.”

“Don’y worry about that right now. The hospital and the state  have programs to help. You need to think of what has to be done to help Sam get well.”

Dull thumps on the glass window drew my attention. There stood the cavalry from our small church, led by our dear friend and Brother in Christ, Jason Shults. Relief poured through my veins. I knew instantly that it would be all right. God had surrounded me with believers. I could lean on them.

The doctor left, taking the herd of doctors with him. But the room was not empty long, for several members of our church had given up their day at a moment’s notice to come to my aid. All of them dressed in the disposable garb, we waited for the long minutes to pass before Sam’s procedure.

An orderly wheeled Sam and I down the hall. Behind him the somber group followed. What a sight that must have been. I remember feeling scared for Sam, but at the same time surrounded by God’s love.

Carefully placing my baby on the table with only his favorite blanket for comfort was very hard to do, but I knew my church family’s strength waited for me in the hall.   A nurse escorted me out the door quickly so Sam wouldn’t be alarmed.

Joining my church family, we formed a circle and joined hands. The men prayed over Sam. Tears flowed freely. I cried so hard that I couldn’t tell you exactly what was said by these men, but I know it was beautiful!

I was soon reunited with our son and returned to his room to rest and wait for the test results. Slowly Saturday moved into Sunday. Exhaustion seeped in, but I kept up my vigil over Sam. Mid-morning on Sunday Nathan appeared at our bedside. Sam mustered enough energy to raise his arms for his father to pick him up.

Test results came back Monday. Thankfully Sam didn’t have Spinal Meningitis, but he had bilateral ear infections, double pneumonia, and RSV. After a few more days in the hospital to build up his strength, we were allowed to go home.

We were grateful Sam was well, but medical bills started to come in and it was easy to lose sight of that blessing. I filled out form after form and made copies of all of our financial records i.

Worry and sadness started to control my life when no forward progress was made.  We were denied financial assistance by the hospital and state. They said we made too much money. The hospital sent out a nasty collection notice.  What could we do?  We didn’t have the money to pay, but they seemed to think we did.

I soon found out why.

“Michele, I called the bank this morning,”  Nathan said. “The teller made an inquiry into my checking account, there seems to be an error.”

“What do you mean error?”

“The bank records show there is money in the account. Almost ten thousand dollars.  I stopped at an ATM to do an inquiry to make sure the bank was right.  Sure enough the receipt says the same thing as the bank.”

Turned out, my husband had fallen behind in balancing the checkbook.

“I simply haven’t had time. With each week’s settlement I just made sure we didn’t spend all of it. I really have no idea what is in there.”

When Nathan returned, while he entertained the children, I poured over his bank statements to balance the trucking company’s books. With my final tally added up, I called Nathan into our bedroom/office to show him my findings.  He stood gapped mouth at the results. The money was truly there, no wonder we were denied help.

Nathan and I, with our children in tow, joyfully entered the Lord’s house the next morning. I remember how brightly the sun showed through the windows as Nathan told how our Lord provided. “Amen” and “Praise the Lord” filled the air.

To this day I believe God put that money there just when we needed it. I promise you if we had known it was there before Sam got sick we would have spent it.

30-33“If God gives such attention to the appearance of wildflowers—most of which are never even seen—don’t you think he’ll attend to you, take pride in you, do his best for you? What I’m trying to do here is to get you to relax, to not be so preoccupied with getting, so you can respond to God’s giving. People who don’t know God and the way he works fuss over these things, but you know both God and how he works. Steep your life in God-reality, God-initiative, God-provisions. Don’t worry about missing out. You’ll find all your everyday human concerns will be met.

34“Give your entire attention to what God is doing right now, and don’t get worked up about what may or may not happen tomorrow. God will help you deal with whatever hard things come up when the time comes.

Michele Mangus is a homeschooling mother of three and a trucker’s wife. They live in central Illinois on “Mangus Ranch” their American Dream. She is a member of ACFW and a critique partner in a small group. “Sam’s Story” is her debut. She is currently working on a historical romance MS based in Elmwood, Illinois, in the late 1850’s involving the strong abolitionist ties in the community.