Every day is a battle—for truth versus deception. For relational intimacy versus isolation. For growth and godliness versus sin and self-destruction. Ultimately, for love toward God and others versus idolatry of self.

This—the battle against self—is by far my greatest battle. This is what threatens to derail me more than any outward casualty or setback I may experience. Self-love leads me toward self-elevation (which is idolatry). Agape love centers me in the will of Christ.

At their root, each of these is a battle between light and darkness.

Two extremes, continually pitted against one another. The only solution? Surrender to Jesus Christ.

It’s almost ironic, as I type this this morning, over a week before it will go “live,” I am and have been in the throws of this battle, one I thought I’d won but a week prior. And the week before that. And the week before that as I prayerfully “crucify my flesh” as Scripture puts it, asking the Holy Spirit to give me the strength to offer all of me to Him as a living sacrifice (Romans 12:1).

And yet, here I am again, resisting the ugly within me so the pure, honorable, self-sacrificing love of Christ can shine forth.

My battle plan? Prayer and praise as I seek to be filled with more and more of Christ, knowing when that happens, all else will fade away. Because He is my treasure, and this present world is short but eternity is forever.

About five years ago, I spoke to women living in a women and children’s shelter in Kansas City, women who had lost nearly everything—their homes, their livelihoods, their self-respect. Some were experiencing the consequences of poor choices. Some were, but not all. Others were simply in a really rough place, likely crying out to God, asking Him why. Why had He allowed them to reach that place?

Did He not see them? Was He deaf to their cries? Had He forgotten them?

Did He not care?

But what if, in fact, His attentive eye was zeroed in on them, in the middle of their darkness, as He shined His love and light through them?

That night, I shared the story of Joseph, a man who, from the very beginning had been given an incredible promise from God—that God would raise him, second to the youngest of twelve sons, to a place of leadership, where the rest of his family would “bow down” to him.

If you’re familiar with this account, you know God had much more planned for Joseph than simply familial leadership. But first, Joseph went through some incredibly hard years facing struggles and humiliation that would, quite frankly, send me hiding in by bedroom with the blankets pulled up to my chin and a big ol’ bag of tootsie rolls within reach.

You can read his story in its entirety in Genesis 37-51, but to paraphrase, God allowed Joseph to be sold into slavery, dragged to a foreign land where he was stripped of all rights and forced to spend his every waking moment in service to another, and then thrown into prison. And at each step, he was given a choice: focus on himself and all he’d lost or perhaps all he “deserved,” (after all, he’d been called, personally, by Creator God!), or surrender and live, 100% in obedience to and for the glory of His Creator.

Because he chose the latter, he shined the light of God in the middle of some incredibly dark places.

I believe this was the battle God had called him to, and make no mistake, it was an intense, moment-by-moment battle! This was also the battle God called Timothy to, as he pastored that church, filled with false teaching and division, in Ephesus. And it’s a battle God calls each one of us to, as we stand against discontentment, selfish ambition, and greed—the very attitudes that had caused the false teachers in Ephesus to wreak such destruction (1 Tim. 1:6-7, 6:4-5).

And so, this brings our study full-circle with the reminder that it’s all about love. God’s kind of love. A love that comes from a pure heart, a clear conscience, and genuine faith.

We can fight many battles in any given day, but the battle that wars within is the most vital, because everything else stems from that. We are most effective when we are most yielded to God’s Spirit at work within and through us. He has a plan, a good, victorious plan, for tackling whatever battle is warring around us, and He may (or may not) use us to fight it.

For those who’ve been following the 1 Timothy Bible study, this weekend, I encourage you to take time review what you’ve learned in the previous weeks. Journal what God has shown you, and simply take time to rest at His feet. Make Romans 12:1 your prayer:

Dear Lord, in view of Your mercy, in view of all You’ve done for me, help me to offer my body—my time, my thoughts, my will; my whole self—to You, as a living sacrifice because of all You have done for me. May that be how I, daily, worship You.”

Pray this prayer often, and then wait and see what God does. Wait and see how He uses you to bring healing to the hurting, life to the dead, and sight to the blind.

What resonated most with you in today’s post? What inner battle do you tend to fight the most, and what can you do today to strengthen your connection with Christ–the One who has equipped and empowered us for victory? What are some ways you fight the battle against self-love?

Share your thoughts and insights with us, because we can all learn from one another! And make sure to check out the latest Faith Over Fear Podcast episode.

It’s one thing to internalize a promise from God, it’s another to make that a public proclamation. When we’re open about our faith and the promises we’re holding onto – especially in a difficult or unknown season – we’re inviting others to experience the goodness and faithfulness of God, too. While it’s not always the easiest step to take, proclaiming our faith publicly has greater impact than we might imagine. Find Kimi at: https://kimimiller.com/ https://www.facebook.com/LivingReflectionsMinistry/ https://www.instagram.com/livingreflectionsministry/ Find Tami at: https://www.tamiwittrock.com/ Find Wholly Loved Ministries at: WhollyLoved.comJoin the private Faith Over Fear Facebook Support GroupJoin the Private Wholly Loved Community Group (also on Facebook): When in your life, have you made a public proclamation of faith? How did that impact you and/or those around you? Is there an area or season of your where God is asking you to make a public proclamation of faith? Is there someone in your life who might be encouraged by your proclamation to stand on God’s promise? How can you stay encouraged when all you have is God’s promise to hold onto? What have been some faith markers in your life? How did those reassure you to keep holding on?  What are some ways to express your gratitude for God’s faithfulness? How can praising God encourage you and others along the way?  See omnystudio.com/listener for privacy information. 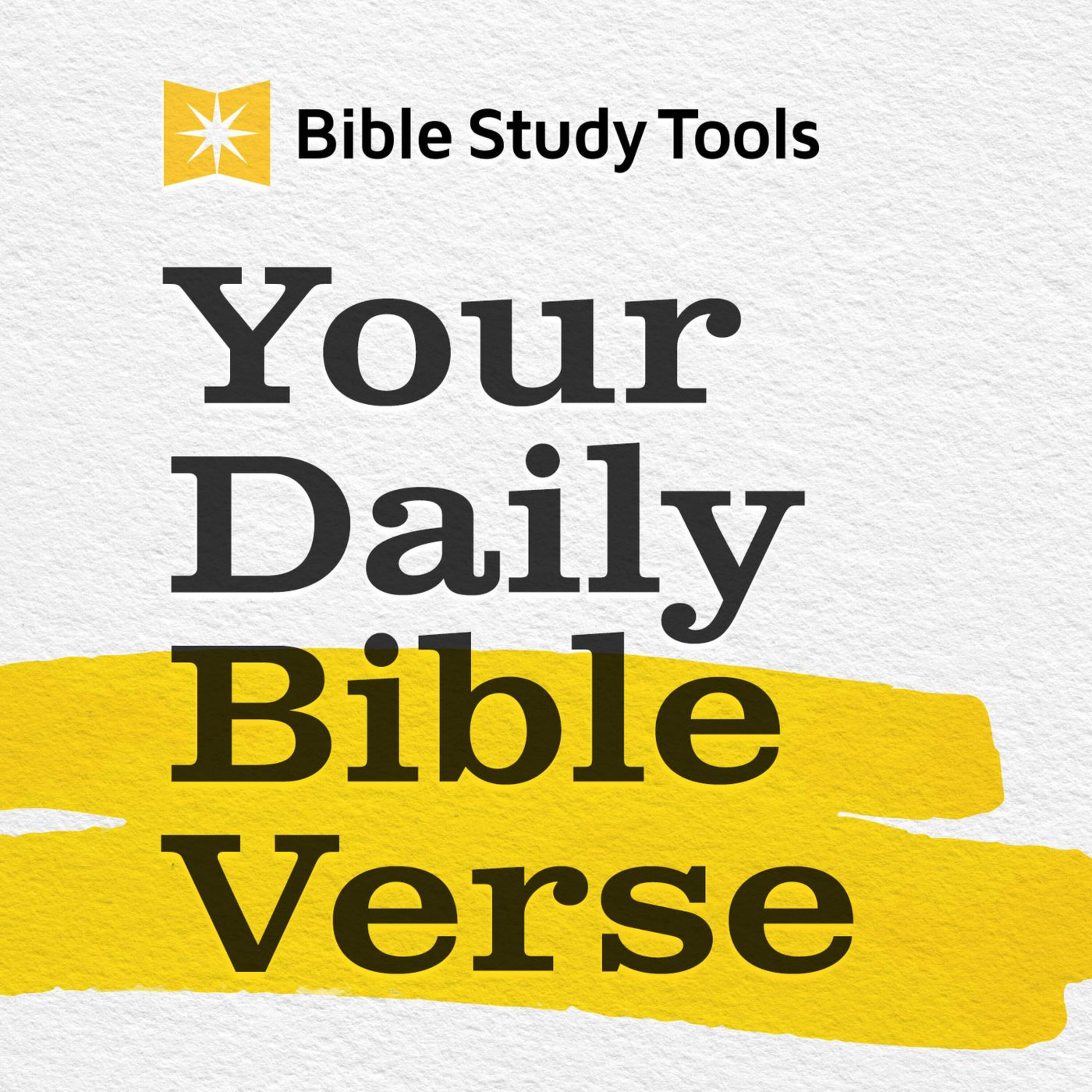 If you enjoy listening to Your Daily Bible Verse, we've got another great show that you'll want to add to your playlist. Let us introduce you to So Much More: Creating Space for God, hosted by Jodie Niznik! So Much More helps you create space to be with God through his Word, prayer, and meaningful conversation. The first part of this podcast is a guided Scripture meditation using either Lectio Divina or Imaginative Prayer. As Jodie peacefully guides you through the passage, you will have space to be attentive to the Spirit and what he has for you in the living and active Word. After you’ve meditated on the passage of the week, then listen in to the companion episode to hear a thoughtful conversation with guests about the passage or a theme from the passage. CONTINUE LISTENING TO SO MUCH MORE:Apple Podcasts: https://apple.co/3DjDagr Spotify: https://spoti.fi/3HcTTmD LifeAudio: https://www.lifeaudio.com/so-much-more-creating-space-for-god-lectio-divina-and-scripture-meditation DISCOVER MORE EPISODES OF SO MUCH MORE:  Finding Peace Amidst Life’s Storms (Meditation on Luke 6:46-49): https://apple.co/3WGuSWM  3 Ways to Stay Standing in Life's Storms: https://apple.co/3JkoJfG  God’s Invitation to Rest (Meditation on Isaiah 30:15-16): https://apple.co/3JoeC9J   What Kind of Rest Do You Really Need?: https://apple.co/3XNSWbt    CONNECT WITH HOST JODIE NIZNIK: http://www.jodieniznik.com Your Daily Bible Verse will be back tomorrow with a brand new episode. 🙏 Thanks for listening.See omnystudio.com/listener for privacy information.