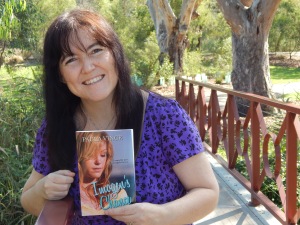 Do you ever feel like you’re drowning? Like the demands on your time or talents have far exceeded your storehouse? Today’s post by Paula Vince couldn’t have come at a better time. Managing a book launch while organizing and facilitating a major fundraising event has kept me busy. Not insanely busy, but busy enough to cause me to pay extra attention to how I spend every moment. (Hm… that sounds like a Bible verse from James. 🙂 )

But in the midst of the chaos, as you know, my computer crashed. And let’s just say, I’m not a fan of my daughter’s fancy, technologically advanced touch-screen computer. *sigh* I think God realized how much I needed this reminder today. Hopefully Paula’s words will encourage you as much as they did me.

Over Your Head by Paula Vince

We’re often conditioned to grow agitated by the thought of being ‘in over our heads’ at anything. I admit, my attempts at ‘winging it’ have made me not merely nervous but also feeling guilty, as if I’m cheating by trying anything new and pretending to be something I’m not. I imagine people who discover my basic incompetence have a right to pay me out.

“This person doesn’t know what he/she’s doing!” are words we never want to hear spoken about us. It’s far easier and more comfortable when we stick to doing the things we’re certain we can pull off flawlessly. My problem is there’s not much that falls under that category. Then I get bored enough to want to crawl out on a limb.

Thankfully, I’ve come across some research on the human brain that convinces me that ‘winging it’ is no mistake after all. Brain scientist, Dr Caroline Leaf, tells us that it’s actually healthy for our brains to be stretched beyond their comfort zone. Trying things we’re not certain we’ll achieve makes our brain environments fertile. It stirs up the lush cells that make us smart and interesting. Effortless performance may feel comfortable but doesn’t help our brains to thrive. She recommends that we choose goals just beyond our present abilities. I cry, “YES!” because I’ve had experience doing that very thing.

In the late 1990s, I dreamed an idea I thought would make a stunning novel. How I wished some experienced Christian author would write it, but nobody did. When it wouldn’t leave my head, I decided that I would be the one. I’d get into the heads of the characters and be the girl who found herself the victim of a shocking date rape. Even more nerve-wracking, I’d also be the boy perpetrator who suffered for years with remorse and self-condemnation. I was in my twenties and unpublished. I wrote the story by hand in the car when I dropped my pre-schooler off at kindy while his baby sister slept in her capsule in the back seat. The result was Picking up the Pieces, which won an International Book Award in 2011 for its second printing.

I like living on the edge of my brain power.

A wise sage, Star Wars’ Master Yoda, said, “Don’t try, do!” And, of course, God doesn’t call the well-equipped, he well-equips the called. When God’s angel greeted Gideon with the words, “God is with you, you mighty warrior!” he’d been threshing wheat in a wine vat to hide it from the Midianites. Gideon’s first reaction was, “Huh, you mean me?” That was my reaction whenGod called me to write those novels and not some best-selling, well-established author.

I’ll finish off with this thought. Dr Leaf said that brains get a good gymnastics work-out when their owners are thinking deeply. Even though my brand of deep thinking is on a far inferior scale to the deep thinking of Albert Einstein, I trust it’s deep enough for the grey matter that God gave me to get a bit of a stir. It seems a reciprocal thing is going on. We write out the ideas we believe God wants us to express, either in our novels or in blog articles, and He gives us more flourishing, better-functioning brains.

Award-winning author, Paula Vince loves to evoke tears and laughter through her novels. A wife and homeschooling mother of three, she resides in the beautiful Adelaide Hills of South Australia. Her youth was brightened by great fiction and she’s on a mission to pay it forward.

Her novel, Picking up the Pieces, won the religious fiction section of the 2011 International Book Awards.

Her novel, Best Forgotten, was winner of the 2011 CALEB Award in the fiction category and also recognized as the best overall entry for the year, chosen over memoirs, devotionals and general non-fiction.

Paula’s books are a skillful blend of drama and romance tied together with elements of mystery and suspense.

Paula is the author of Picking up the Pieces, The Risky Way Home, A Design of Gold and Best Forgotten. Her new novel, Imogen’s Chance, will be published in April, 2014.

Let’s talk about this. I’ve never considered how following my calling might exercise my brain, but I’ve often (daily?!) recognized God’s stretching. Early when I sensed the call to write, a sermon on the man who hid his talents and was then chastised by his master really hit home. Actually, it made me cry! Because I knew if I didn’t answer the call to write, I’d be burying what God gave me–what He intended for me to use for His glory.

What about you? What area do you sense God is stretching you in? (Touch screen computers???? hahaha.)

Share your thoughts with us! And sorry today’s post has no fun pictures. (I think I miss those more than y’all!)