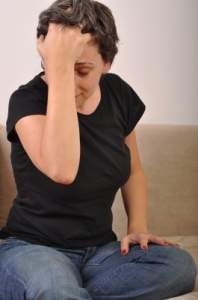 I’ve often said, forgiveness is rarely a one-time event. Nor is it an emotion, at least originally. It usually begins with a choice, sometimes a teeth-gritting, white-knuckling, Lord Jesus please help me, choice. One that must be made again and again and again, every time old wounds and negative emotions resurface.

Forgiveness is rarely easy, but it is possible, with God’s help.

Today my friend, Janet Sketchley, Author of Secrets and Lies, shares her thoughts on

how we can begin to move toward forgiveness, and the freedom and healing that offers.

BUT FIRST I wanted to announce last week’s give-away winner.

LoRee, congrats! You won a copy of When Dawn Breaks! I’ll shoot you an email so we can talk about the best way for me to get that to you. 🙂 In the meantime, you can read the first two chapters here.

And now, for Janet’s encouraging thoughts.

Someone hurts you. Next day, she apologizes. Do you say it’s okay, not a big deal? Pretend nothing happened, for the good of the relationship? Or do you refuse to forgive? Can you forgive, if it’s a major hurt?

Forgiveness is more about the victim than the offender. We’ve all been both. As the wounded parties, we can find healing and wholeness by acknowledging what happened and letting it go. Otherwise it stays inside us and continues to do damage.

“But you don’t know what she did!” No, but I know the hardest things are beyond our power to forgive without Jesus helping us. It can take years to start forgiving a traumatic hurt, and that may be just the first step. It may need regular repetition until that forgiveness “takes” at our deepest levels. 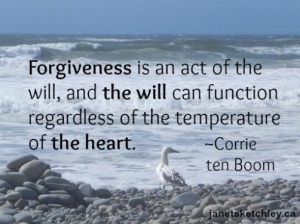 Dismissing a hurt, or learning to work around it, isn’t forgiveness. Honest forgiveness is a hard choice and it takes time, and we still have the after-effects of the hurt. If I steal from you and you forgive me, wisdom says you shouldn’t put me in charge of your bank password.

God’s forgiveness is different. If we accept Jesus’ sacrifice on the Cross to buy us back from destruction, He forgives us. Every time we ask with a sincere heart. Even for the same offense, again and again.

He never denies the effects of our sin, and we may live with  its consequences. He forgives, but He doesn’t brush it off—the chance at forgiveness came at a great cost. But He removes it.

People may struggle to forgive, or may say they do without really meaning it. With God, we can believe that once He forgives, He truly does put the matter away. Not forgets, not dismisses. He marks it “paid.” That allows us to see the depth of the cost, the strength of the offense. But it doesn’t leave us with a burden to prove ourselves or to earn our way back into His good graces.

God knows our hearts and intentions—and our weaknesses. He likely wouldn’t put an embezzler, for example, back into the same position of trust. There are consequences in our world. But He regularly forgives and cleans us up, knowing that despite our best intentions we’ll mess up again. He doesn’t keep a tally that will eventually cut us off. Instead He offers as much help as we’ll take. As often as we need it.

In the mean time, He acknowledges the weight of what we’ve done, minimizing nothing. Jesus Himself paid the price. Now He works in and with us to remake us. How strong a love is that?

Janet Sketchley is the author of Heaven’s Prey and Secrets and Lies, two novels of suspense and redemption. She also blogs about faith and books. Janet loves adventure stories, worship music, tea and Formula 1 racing. Like Carol in Secrets and Lies, she loves music and tea. Unlike Carol, Janet isn’t related to a dangerous offender, has a happy home life, and has never been threatened by a drug lord. May those tidbits continue to hold true! You can find Janet online at janetsketchley.ca. Fans of Christian suspense are invited to join Janet’s writing journey through her monthly newsletter: bit.ly/JanetSketchleyNews.

Let’s talk about this! We’ve all been hurt, betrayed, let down by someone we love. So how do we handle that? How have you dealt with past pains? Did you find forgiveness took effort and perseverance, or did God grant you a miraculous emotional healing and change of heart? Or perhaps you’re still hurting, still trying to fight for forgiveness. If so, did Janet’s post help you? Share your thoughts in the comments below or at Living by Grace on Facebook.

How to Trade Bitterness for Blessings

Yesterday on Bonnie Leon’s blog, I shared the time I asked God for permission to quit. You can read that here.

Tuesday I chatted with Greg Vogt, station manager of Omaha’s KCRO about my new release and the inspiration behind it. You can listen to our on-air discussion here:

Monday and Tuesday I participated in two blog interviews.

Join me on Grid-iron Granny’s here.

On Saturday, I visited with Alexis from Capturing the Idea. You can read our chat here.