I’ve heard it said, “Identity determines behavior.” Based on this logic, it follows that believers should be known for their confidence. And yet, how often, do we live in bondage to our fears and insecurities? And all because we aren’t fully embracing who we are in Christ. My guest today uses a fun story to help us recognize who we are, because, as we like to say at Wholly Loved, when you live wholly loved, everything changes.

Know Who You Are by Voni Harris

“Know, first, who you are; and then adorn yourself accordingly.”

Dad named our new silver and brown German Shepherd Epictetus, after his favorite philosopher, and taught all three of us young kids to pronounce his name. But we called him Epic. Epic would let us use him as a pillow, teach him new commands, and he went wherever we wanted him to go…

But you better not try to come into our yard uninvited. He was all German Shepherd!

Dad taught him basic obedience, then allowed me to train him for 4-H dog shows and obedience trials. He was a patient and smart dog.

One day, I took Epic to a 4-H dog show in the showmanship category, like the ones on TV, and “stacked” him solidly on all fours to demonstrate his physical soundness. But the judge told me, “This dog is a purebred shepherd. You need to stack him like a shepherd.” And he taught me how to stack him sloped, one hind leg behind the other, to show off the power of his hips.

At the next dog show, I stacked him in the German Shepherd style. That judge said, “This dog doesn’t have enough shepherd in him to stack him like that.”

Epic was a purebred German Shepherd. Duh. Sometimes people don’t know what they are talking about. Even judges.

This reminds me of David, when Samuel came to anoint him as king over Israel. When Samuel saw David, he didn’t see the king inside the young shepherd boy, just as the second judge didn’t see the purebred in Epic. 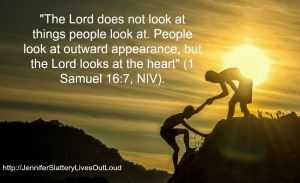 Fortunately, Samuel listened to God, when He said, “The Lord does not look at things people look at. People look at the outward appearance, but the Lord looks at the heart” (1 Samuel 16:7, NIV).

I pray I, too, can see others the way God sees them rather than judging them with prejudice and misinformation as the second judge did Epic.

May we view ourselves with that same love and grace, also.

It’s taken me a long time to realize what God sees in me. Not a worthless fast-food girl, or a sinful failure, or a useless human being. God sees me as his daughter, a writer, a mother, a confidante and friend, a helpmeet and soulmate for my husband.

As a Stoic, Epictetus’s theology wasn’t necessarily on target, but he was right in what I quoted above, and I think Epic the dog would agree: “Know, first, who you are; and then adorn yourself accordingly.”

Who has God made you to be, my friend? 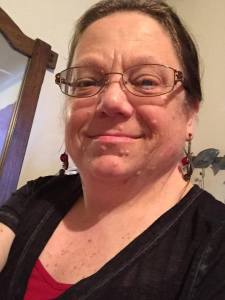 Voni Harris writes from her family’s home on the beautiful Alaskan island of Kodiak, with a husband, a golden retriever and a wheaten terrier to keep her from sitting at the computer too long at a time. She holds a radio-TV degree from Drake University, and her short story “The Wedding” was published in Heart-Stirring Stories of Romance (edited by Linda Evans Shephard). Her Christian suspense manuscript Nothing Hidden won the 2015 Daphne DuMaurier unpublished inspirational category. It was titled “Next of Kin” when it won ACFW’s 2013 First Impressions contest. Tutoring is the second love of her life, behind writing.

Let’s talk about this! How well do you tend to live out your true identity? What area do you most struggle with?

I love Voni’s closing line–Let God adorn you. Rest in His grace. Discover through Scripture what He has to say about you and learn to live in that. May God help each of us to see ourselves and one another as Christ sees us.