Where does man’s choice, most specifically, man’s sin, and God’s sovereignty, intersect? I suspect we’ve all wrestled with that question at some point. We understand that God is all-powerful, all-knowing, all-loving, faithful, and true. We believe the One who formed the stars from nothing and set our world into motion can easily orchestrate the details of our lives.

But what about human choice? What about when our boss makes a foolish decision and the company goes bankrupt, or one person’s sin drastically impacts the life of another? We all watch the news, and if we’re honest, we wonder, Lord, where were You when that parent began abusing that child, or that shooter purchased that gun, or that drunk driver got behind the wheel of his car?

Though admittedly, the answers to such questions are much more complicated than my temporal, short-sighted mind

could ever understand, I’m comforted with this: Today isn’t the end, and one day God will indeed turn all things to good.

Scripture reveals this again and again. Consider Sarai, later called Sarah, Abraham’s wife. Her story is told in Genesis chapters 12-23. God called her and her husband out of a pagan city-state and led them to what scholars refer to as the Promised Land. They followed,  obediently it seemed, until Abraham became scared—twice—and betrayed his wife—twice. She soon found herself in a helpless, terrifying situation.

But God came through. He saw her, He rescued her, and He ultimately penned a beautiful story through her.

Then there was the young Hebrew named Joseph, born three generations later. God called him out from among his brothers for an amazing God-ordained purpose—the saving of many lives. Only shortly after that call, the immature teen bragged about a series of dreams God gave him. His siblings became enraged, beat him, and sold him into slavery. And that wasn’t the worst he experienced. Later, while serving faithfully in a foreign land, his master’s wife hit on him, numerous times. Driven by integrity, he rebuffed her. She became incensed, accused him of assault, and had him thrown into prison.

But again, God came through. Not immediately, not even quickly, but in His perfect timing. At just the right time, actually. He orchestrated Joseph’s release and placed him in a position of leadership, just as Joseph’s dreams had predicted, decade’s prior.

I could go on, and perhaps you could too. Maybe like me, you could even share examples from your life—of times when others attempted to harm you but God ultimately turned the situation to good, like Romans 8:28 promised. That verse states, “And we know that in all things God works for the good of those who love Him, who have been called according to His purpose” (NIV)

Notice Scripture didn’t say, “God will only allow that which is good.” Rather, it says, “He will turn to good …”

In other words, yes, God may very well let us experience some of our worst fears. But when we do, we can trust that those terrifying moments won’t last forever and that God will one day use them for good. 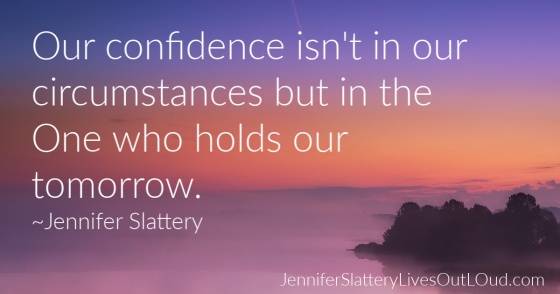 That is where our confidence rests—not in the circumstances of today but rather the promises of tomorrow when God will make all things right. This means we can trust, though life might hurt now, heaven is coming, and I believe when we’re standing on the other side of eternity, experiencing life as God intended it, we’ll deem every momentary struggle endured today not only worth it but insignificant in comparison to the paradise God held secure for us.

Let’s talk about this! Where do you place your confidence? Do you trust that God indeed holds your tomorrow? And if so, how does that trust impact your today? Share your thoughts with us in the comments below!

Also, I realized a bit ago, I never gave a “deadline” for the book bundle giveaway! I will close the contest to new entries

on Nov. 16th. Y’all can “vote” on your favorite entry between from Nov. 21st through Nov. 30th. I’ll announce the winner the first week of December–that way whomever wins can use the books as Christmas gifts, should they choose.

For more information or to enter, go HERE.

And if you haven’t done so, make sure to check out Wholly Loved’s latest Bible reading plan, 20 Days of Relational Health! You can find it HERE.

Our hearts crave deep, lasting connections–to know we are loved and belong. This Bible reading plan will help you

Connect with Jennifer Slattery on Facebook and Instragram. Check out her blog on Crosswalk HERE.