If you’re one of my lovely Facebook friends, you’ve probably already learned about this challenge. It’s similar to the Reach Out to Live Out we did some time back. Which was totally awesome! I loved reading about the many diverse ways God’s children reached out to others and experienced God’s love pouring through them. In my opinion, there’s nothing like it. Christian, the abundant life comes when we surrender fully to God in every area of our lives, including our to-do lists and schedules.  (For an excellent devotion about this very thing, click here.) Because this Christianity thing is more than a Sunday gathering. 🙂

I’ll share one, an act that seemed small, maybe even insignificant, but meant the world to the recipient. Donna* has a chronic illness that most often is quite manageable. But Saturday night, for whatever reason, it flared, and she felt as if her entire body was in revolt. Pain intensified and refused to be abated. It kept her up past ten, past eleven, past twelve… and Sunday was scheduled to the hilt. She had much too much to do to forego sleep.

She prayed God would take the pain away. Prayed He would maybe knock her out so she could get a few hours of sleep, enough to allow her to press through her commitments the next day.

But as the clock ticked by, she began to realize, she might need to ask for help. So she did, sending out a text message to some sweet friends asking them to perhaps cover some of her commitments. It was humbling, a moment of admitted weakness. To her, it felt like failure.

At 3 am and after a sufficient amount of Tylenol and Ibuprofen, she finally crashed.

The next morning, she woke up feeling a fair amount better. Not 100%, but enough to press through her commitments. So, she sent out another text, alerting everyone that she could indeed honor her commitments. 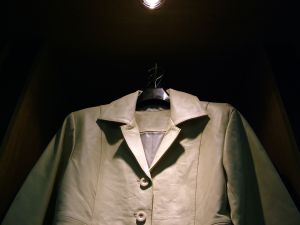 She went to church loaded up with her medicines and still feeling a bit shaky–not to mention exhausted. Apparently shivering, for a dear sister in Christ approached her, and offered her a leather jacket.

What a small gesture, right? But to Donna, this felt like a giant hug. In fact, the rest of the day, when she looked at this jacket and thought of the small act of kindness, her heart swelled. She can’t quite explain why that simple act meant so much, except maybe that it was offered at a time when she felt defeated. But that’s the way it is with simple acts of kindness, isn’t it? They don’t have to be grand or complicated to touch someone deeply. Really, it’s largely in the act, in the, “I get it, and I care.”

Do you have an act of kindness story to share? Send it my way at jenniferaslattery@gmail.com.

So what about you? What’s one thing you can do today to show kindness to someone else? I’d love to hear from you! Share your thoughts in the comments below or on Facebook at Living by Grace.